Cardiac function relies on the coordinated propagation of the action potential (AP), the rhythmic electrical signal that triggers the contraction of every cardiac cell. Arrhythmias are frequent complications of heart disease and can potentiate heart failure, lead to stroke and cause sudden death. The AP is an intricate dynamic phenomenon, which relies on the function of ion channels. The complexity of the AP and of cardiac conduction explains why the prevention and treatment of arrhythmias still remains a great challenge.

Our research addresses cardiac conduction with an interdisciplinary approach unifying in vitro experiments and computer simulations. In vitro, we use a custom developed system to stimulate and record the electrical activity of cardiac cell cultures with microelectrode arrays. This approach is combined with techniques to pattern the cultures to predefined geometries. In computer simulations, we reconstruct conduction using mathematical models of the cardiac cell. These simulations provide insights into aspects not accessible experimentally.

Effects of cardiac tissue deformation on its electrophysiological properties

The pumping heart continuously changes shape during every beat and the electrophysiological properties of cardiac tissue are influenced by deformation (strain). This so-called mechano-electrical feedback involves numerous factors such as stretch-activated channels, modulation of ion channel function as well as changes in tissue resistance and, possibly, capacitance.

Using cardiac cell cultures grown on our recently developed stretchable electrode arrays (collaboration with Prof. S. Lacour, Laboratory for Soft Bioelectronic Interfaces of the EPFL), we are investigating the effects of strain on the electrical activity of cardiac cell cultures. We demonstrated that uniaxial strain applied in the direction of action potential propagation exerts a different effect on conduction velocity compared to uniaxial strain applied perpendicular to propagation. This difference is explained by the different effects of these two types of strain on myoplasmic resistance. 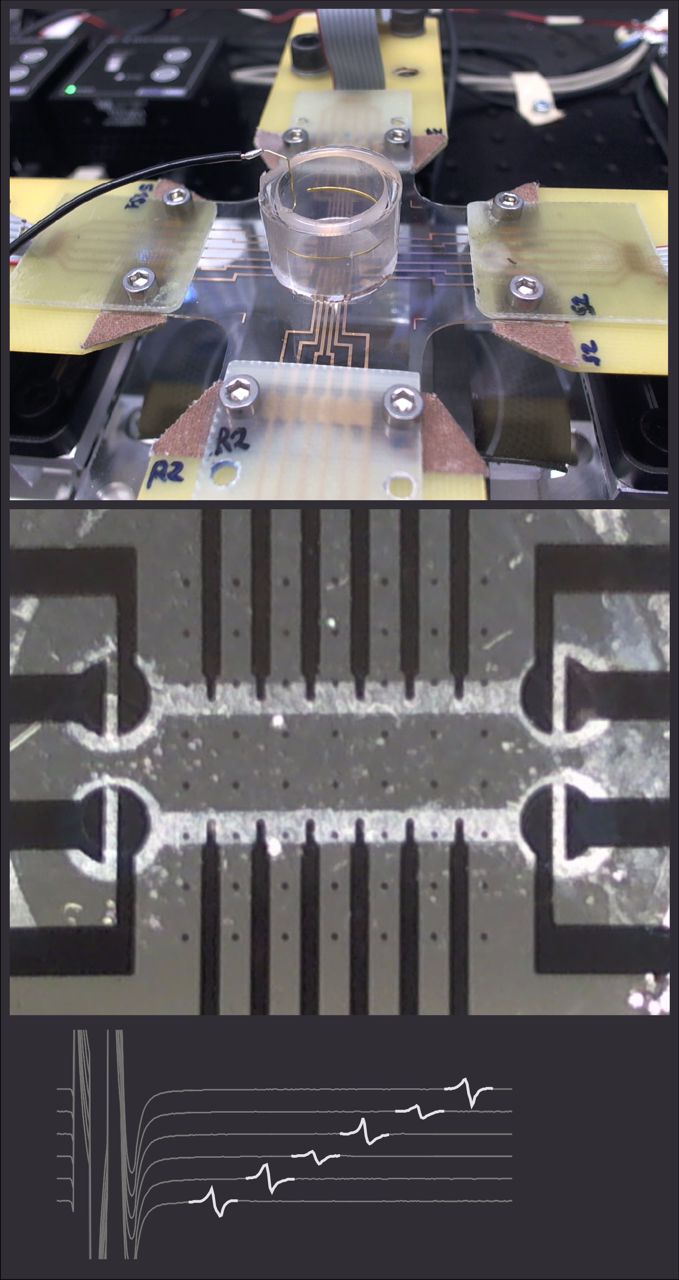 Classically, cardiac conduction relies on the Na+ current (INa) flowing through voltage-gated Na+ channels during excitation and on intercellular currents through gap junctions. However, an alternate mechanism has been proposed for impulse propagation, especially when gap junctional coupling is reduced. This mechanism, called «ephaptic conduction» or «ephaptic coupling», is mediated by large negative extracellular potentials occurring in intercalated discs, i.e., in the narrow extracellular clefts separating adjacent cardiac cells (Figure). Activation of Na+ channels in the membrane on one side of the intercalated disc causes a large INa and thus a large negative extracellular potential (Ve) in the cleft, which translates, on the other side, into membrane depolarization and Na+ channel activation. This controversial mechanism is the object of our research. In collaboration with the team of Prof. H. Abriel, we demonstrated that confining the extracellular space near a cell expressing human cardiac sodium channels affects the sodium current as predicted by computer simulations taking the ephaptic mechanism into account. Furthermore, our computer simulations demonstrated that the clustering of Na+ channels in the intercalated disc potentiates ephaptic conduction. 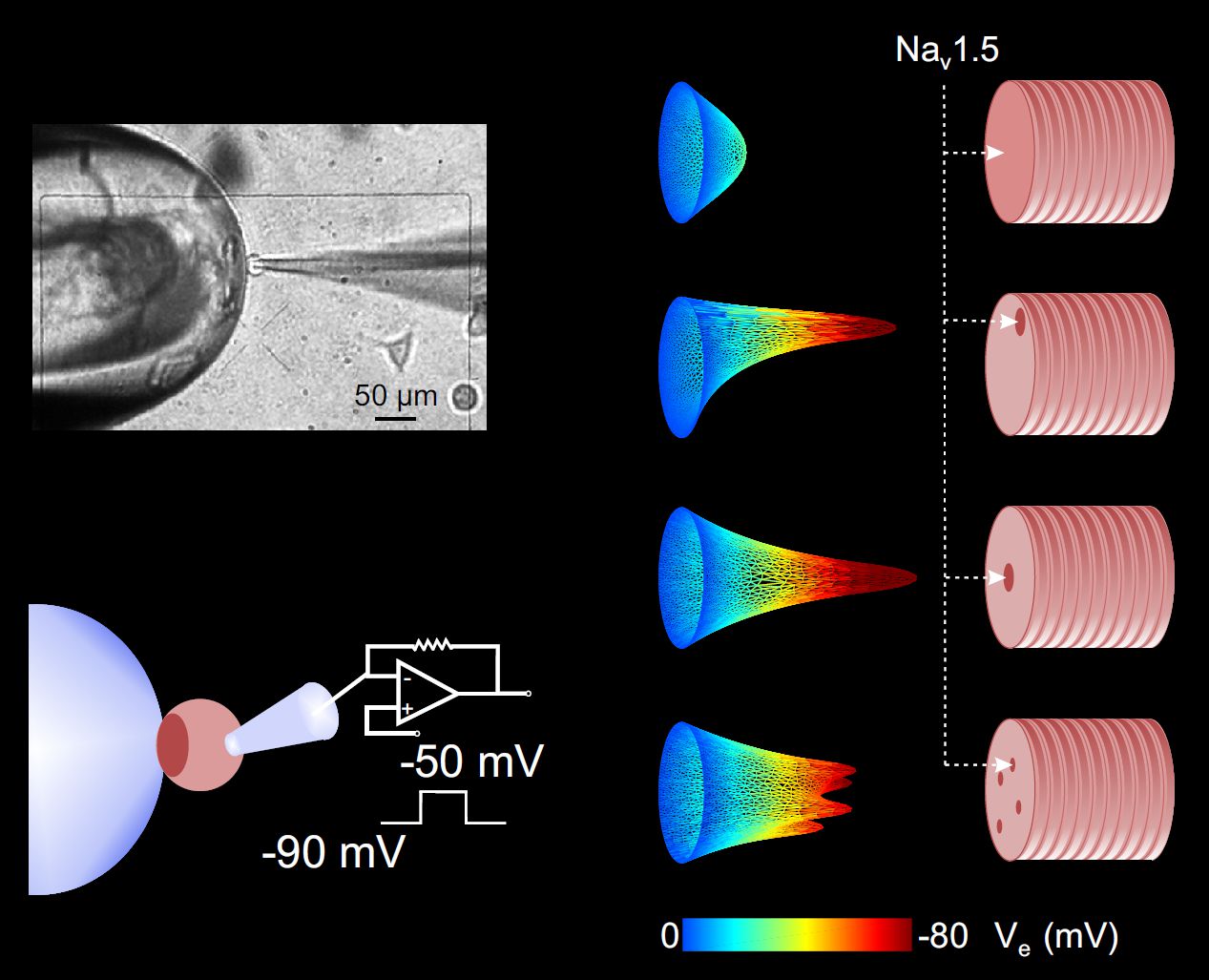 The myocardium is known to become heterogeneous in the diseased heart, and myocardial heterogeneity is known to be a substrate of conduction disturbances. Among these disturbances, slow conduction and conduction block are the typical mechanisms leading to reentrant arrhythmias such as tachycardias and fibrillation. Slow conduction and conduction block can result from a reduction of inward membrane currents or a reduction of gap junctional coupling. However, slow conduction and conduction block can also arise from the presence of heterogeneous cellular phenotypes in cardiac tissue and from the particular arrangement of cells with different phenotypes within the tissue. In bioengineered cardiac strands consisting of mixed populations of cells and in corresponding simulations of cardiac conduction, we are investigating the functional consequences of this cellular heterogeneity. We showed that conduction in strands consisting of mixtures of normal and connexin 43 knock-out myocytes is slow and highly prone to block. In collaboration with Dr. Nina Ullrich (University of Heidelberg), we showed that conduction in strands combining native cardiomyocytes with stem-cell derived cardiomyocytes (as a model of tissue repair) is always impaired in comparison to propagation in strands of native myocytes (as a model of normal tissue). In addition, we replicated using this model the previous observations of the group of Prof. S. Rohr in co-cultures of myocytes and myofibroblasts.

Action potential duration (APD) and conduction velocity (CV) depend on one or several previous diastolic or interbeat intervals. This dependence, called «restitution», is an important determinant of the stability of conduction and is involved in the generation of arrhythmias. Our goal is to explore restitution by developing new pacing protocols and by exploring novel analyses inspired from systems theory to extract quantitative information regarding restitution and conduction characteristics.

In particular, we developed a framework in which a cardiac cell or cardiac tissue is paced at intervals varying randomly. By considering the investigated cardiac preparation as a system taking an input (the series pacing intervals) and producing an output (i.e., the series of APDs, interbeat intervals), the input-output characteristics of the system can be understood in terms of transfer functions. The identification and the analysis of such transfer functions provide invaluable additional information. This information can be exploited to derive new strategies to quantify the susceptibility to arrhythmia and to identify possible mechanisms. The expected developments may form the basis for a future implementation enhancing clinical electrophysiological testing in cardiac patients, permitting to assist diagnostic and therapeutic decisions.